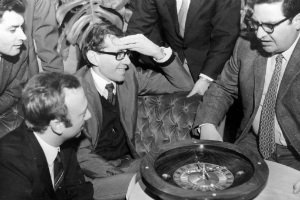 Self-proclaimed roulette code cracker – Richard Jarecki – has died at the age of 86. The medical researcher who became a legandary figure among gamblers around the world and made millions of dollars in European casinos, died on July 25 at the age of 86.

Jarecki claimed he had cracked the roulette code using a computer he had access to, but in fact he took advantage of flawed roulette wheels to win big and became a threat to some of the most popular casino facilities in Monte Carlo, Italy, and Las Vegas.

It is believed that Jarecki was banned from several casinos and according to his wife’s account, Italian authorities managed to bar him from entering the country for several months. The Morning Herald cites San Remo casino’s managing director Robert Lardera who said that by 1969, Jarecki was considered “a menace to every casino in Europe”. His casino winnings were believed to exceed $1.2 million or more than $8 million in today’s money, which is an exceptional amount of money since roulette is a random game. Winning and losing should be a matter of pure chance.

During the early 1960s, Dr. Jarecki and his wife visited dozens of casinos across Europe and in the United States. He was well-known in Monte Carlo, as well as in the casinos in Divonne-les-Bains, France, Las Vegas and Baden-Baden, Germany. He was also a regular player at the Italian Riviera casino in San Remo, which generated serious losses during his playing sessions. His success on the roulette table encouraged other gamblers to place the same bets and as a result, casinos generated even larger losses. Try your luck: Click here

While he was studying in his home country, Richard W. Jarecki realized that there had to be a way to successfully predict where the ball would land on the roulette wheel. According to news reports from the 1960s and 1970s, he explained that he managed to do that and win by developing a statistical model on a computer in the University of London. This was the official version meant for casino owners and employees, however, while the truth was very different.

It turns out that Jarecki was actually carefully observing roulette wheels for slight imperfections and collected large amounts of data on each roulette table before he started playing. After analyzing the entire information gathered by himself and his friends, he successfully exploited these flaws in the construction of the wheels and the tables, eventually turning the edge in his favor. These imperfections included manufacturing defects, scratches, wear and tear, unleveled gaming tables, and more. Try your luck: Click here